There are some medications that can have an adverse effect on your mouth and teeth. 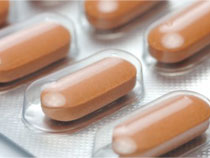 Tetracycline Staining
In North America, in the 60’s and early 70’s, children who were exposed to an antibiotic called tetracycline developed varying degrees of dental problems, including discoloration of the teeth. The medication had its negative effect when either given to patients below 8 years of age, or to pregnant mothers. The medication is no longer given by dentists or physicians to these two groups.

Dryness of the oral cavity can result from a number of factors. Medications can influence the secretion of saliva from the salivary glands. The lack of normal saliva production leads to a very dry environment in the mouth. This dry environment results in an imbalance in the normal bacteria in the mouth and can lead to an overgrowth of microorganisms that result in increased dental decay and soft tissue infections of the mouth. Without saliva, your body losses one of its natural defenses to cleanse the mouth of harmful cavity causing bacteria.